Devoid of accent, if you were reading a transcription of a conversation and told it happened somewhere in America, you might still be able to figure out where. How? Regionalisms. They’re those seemingly insignificant words that creep into your vocabulary after living in an area for a while. You pick these colloquialisms up to talk with your neighbors and friends in a sort of short hand. Often, it is only when you travel somewhere else that they become apparent to you again.

devil’s strip/tree lawn (It’s that patch of lawn between the sidewalk and the street.) 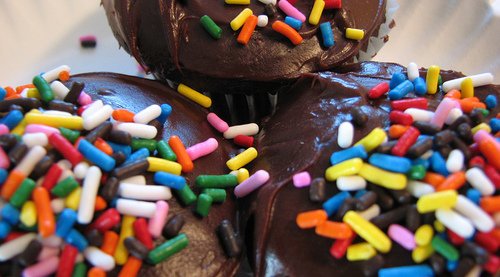 Are these “sprinkles” or “jimmies?” Credit: Matt McGee

In some cases, regionalisms cause an uproar with grammarians. For example, in the South it’s quite common to hear a person say something like, “Let’s don’t cause a fuss.” “Let’s don’t” isn’t grammatically correct, but as we know, people don’t speak with perfect grammar.

And now the University of Wisconsin is set to publish the final volume of the Dictionary of American Regional English (or DARE) later this year. The project started to combat theories that the media is wiping out regionalisms. It highlights linguistic differences seen across the country, and proves that we all have our own way of speaking.

Did we miss some of your favorite regionalisms? Comment below to let us know.