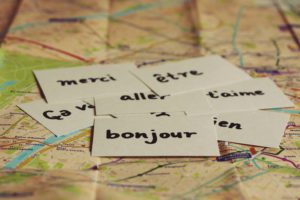 When I started my first job in the translation industry as a project manager more than 15 years ago, one of the biggest surprises for me was the number of translation requests we received for French. After all, weren’t Spanish, Chinese, and Arabic the most “important” languages for translation now?

Not to mention, I was also surprised by the diversity of the French translation requests that came across my desk. Some of them required Metropolitan French, while others needed Canadian French. A rapidly increasing number of clients were also requesting various regional dialects of French from West Africa for their translations. So, in this world of French, which dialect is best for your French translation?

A World of French

According to Ethnologue, as of 2017, there were roughly 76.8 million native speakers of French. By adding L2 speakers, that number reaches nearly 275 million. This really should not come as a surprise, since French was the language of the aristocracy and educated classes in Europe for many centuries. France maintained one of the largest colonial empires in history. And, while French no longer has that kind of prestige on the world stage, it is still one of the official or working languages of many international organizations, such as the United Nations and European Union.

French is also experiencing record growth. In Europe, it is spoken in Metropolitan France, Belgium, Luxembourg, Switzerland, and even parts of Italy. In North America, French is one of the two official languages of Canada, and an old version of French is still spoken natively by small numbers in the United States, Louisiana, and parts of northern Maine and Vermont.

Most of the growth of the French language, however, has been coming from Sub-Saharan Africa. According to the International Organization of La Francophonie (OIF), the number of French speakers has grown by 25% since 2010 and is expected to increase nearly threefold by 2060. Most of the increase is happening in multilingual Western Africa – a former part of the expansive French Empire — where French has become the lingua franca for business and commerce, as well as access to advanced education.

Which Dialect is Best for Your French Translation?

For example, while there are various dialects of French within West Africa, the characteristic features they share are the introduction of many words and expressions adopted from local African languages as well as the use of the alveolar trill, sometimes referred to as a “rolled R.” There are also numerous instances of specific French words being used to mean something different between Metropolitan and African French varieties.

In terms of Canadian French versus Metropolitan French, there are some significant differences in syntax, vocabulary, and pronunciation (e.g., vowels with nasal intonation are even more nasalized in Canadian French). Also, due to being surrounded by English-speakers on all sides, Canadian French has typically adopted many words and expressions from American English that are not used in France.

When it comes to choosing which dialect of French you need, you should first and foremost consider the target market of your translation. For example, if you are running a marketing campaign in Quebec, you will most certainly need to use Canadian French. In contrast, a campaign in Europe would use Metropolitan France for a campaign in France or Swiss French for a campaign in Switzerland.

Likewise, if you are targeting a specific country in Africa, it is best to use native French speakers from the country in question. If your campaign is targeting all French-speaking countries in West Africa, however, rather than multiple different translations, Metropolitan French would be a better choice. It would be understood by the broadest number of people, as it is often the language of formal education.

Finally, based on the type of document, you should consider the tone of the language. Spoken, colloquial French can vary significantly from region to region. For a localized marketing campaign, you should use a more local, vernacular style of the language, including local words and expressions. For more formal documents, such as business agreements, government documents, etc., a more formal tone is better.