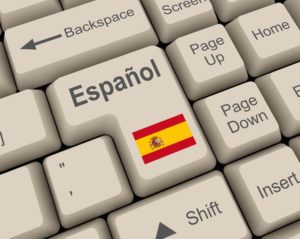 Spanish is the most requested language for translation by volume in the United States and is also the most popular foreign language for Americans to learn. In fact, more than half of all university students enrolled in a language course are studying Spanish. Part of what makes Spanish so attractive as a foreign language is its widespread use in many parts of the United States increased job opportunities, as well as its relative ease of learning for English speakers versus languages such as Arabic, Japanese, or Chinese.

One of the main reasons that Spanish may seem easier – despite the seemingly endless number of verb conjugations that students must memorize – is the large number of cognates that exist between English and Spanish. Cognates are words that share the same root or have a similar sound and meaning. For example, the adjective “civilized” in English is civilizado in Spanish, or “much” in English versus mucho in Spanish. Some estimates indicate that there are more than 25,000 cognates between English and the Romance Languages, including Spanish, French, Portuguese, Italian, etc.

One example is a sign at the world’s most popular coffee shop with both English and Spanish versions. The English version read “Exit Here,” while the corresponding Spanish translation was Éxito aquí. “Exit” in English and Éxito in Spanish are excellent examples of false cognates. While they may sound nearly identical, éxito in Spanish actually means “successful.” The correct Spanish word for exit would instead be salida. 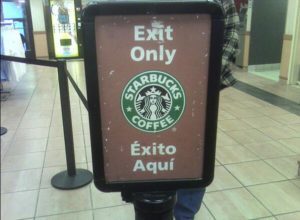 A potentially much more costly example for a business came in the form of a marketing campaign for an American deodorant brand in Mexico. The American company sent their own Spanish translation of their slogan, “If you use our deodorant, you won’t be embarrassed.” Their translation in Spanish used the word embarazada to mean “embarrassed.” Unfortunately, embarazada in Spanish means “pregnant.” The correct Spanish word would have been avergonzado or even tener vergüenza, which literally means “to have shame.”

Finally, an example of a Spanish translation error involving false cognates with life and death consequences was the case of 18-year-old baseball player Willie Ramirez in South Florida. Willie Ramirez’s family used the Spanish word intoxicado to describe their suspicions about his condition when he was rushed to the hospital, thinking that he may have eaten something that caused his medical crisis. In Spanish, intoxicado is used to refer to poisoning of some kind. However, the Spanish interpreter present at the hospital translated intoxicado as “intoxicated.” Therefore, the medical team began treating him for a drug overdose. Several days later, they determined that his condition was caused by bleeding in the brain and he was left as a quadriplegic due to not getting the appropriate treatment because of a mistaken translation that led them to assume he had overdosed.

Of course, the best way to avoid having a false cognate ruin your next Spanish translation project or interpreting assignment is to work with a translation company like Affordable Language Services that works only with professional, certified Spanish translators and has a comprehensive, multi-step quality control process that involves translation, editing, and proofreading, all done by separate linguists. In this way, you can mitigate the risk of getting tripped up by Spanish false cognates.