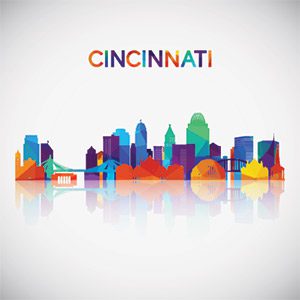 While Cincinnati may not be one of the first places to come to mind when thinking of popular cities for new immigrants, recent studies conducted by the New American Economy (NAE) and the Seattle-based organization, Boundless, rated Cincinnati as one of the most immigrant-friendly cities in the country. The studies ranked several factors, including job availability, legal support, and livability. In the NAE study, Cincinnati received a perfect score for civic participation.

Immigration to Cincinnati has come in several waves, stretching back to the mid-19th century when large numbers of German immigrants settled in the area. This was followed by subsequent waves of immigrants from Ireland, Yiddish-speaking Jewish immigrants, African Americans, and Latinos from Central and South America.

Besides bringing new cultures and foods to Cincinnati, immigrants have also brought their native languages. While the numbers of German-speaking and Yiddish-speaking immigrants have since dwindled, many other languages are now being spoken in Cincinnati. Currently, the largest population of foreign-born immigrants come from India (9.4%), Guatemala (7.8%), China (7.2%), and Mexico (6.7%). There are also significant immigrant communities from Ethiopia, Germany, Eritrea, and Nicaragua.

According to data from the U.S. Census Bureau, 7.92% of the population in Cincinnati speaks a language other than English at home, with the most widely spoken of these languages being Spanish. While this is still far below the 20% of the national population, it continues to grow as more and more immigrants learn of Cincinnati’s welcoming environment and job opportunities.

In the Greater Cincinnati Area (Cincinnati/Ohio/Kentucky/Indiana), the most common foreign languages spoken are Spanish or Spanish Creole (48,956 speakers), Chinese (10,406 speakers), and African Languages (6,648 speakers). In Ohio as a whole, the top five languages other than English spoken at home are Spanish, Somali, Arabic, Chinese, and German.

Of course, the growing numbers of non-English and Limited English Proficient (LEP) speakers have created an increased demand for professional translators, interpreters, and language companies to provide translation and interpretation services for the immigrant community and to assist them with access to services such as schools and healthcare.

To that end, the Language Access Committee Greater Cincinnati Regional Language Access Plan was implemented in 2018 by the Health Collaborative to assist organizations in putting in place language access plans to ensure that patients, regardless of which language they speak, have equal access to necessary healthcare services in accordance with federal law and the national standards for Culturally and Linguistically Appropriate Services (CLAS) in healthcare. The National CLAS Standards “are a set of 15 action steps intended to advance health equity, improve quality, and help eliminate health care disparities by providing a blueprint for individuals and health and health care organizations to implement culturally and linguistically appropriate services.”

The Ohio State Department of Education and Cincinnati Public Schools also have policies in place to provide language access services to students and their parents to comply with federal regulations and the Every Student Succeeds Act (ESSA). This includes translation of vital documents into multiple languages (depending on the non-English speaking and LEP populations in each respective school district), interpretation services for parents, translation of Individualized Education Plans (IEP), and more.

In order to meet this growing demand for foreign language translation and interpretation support in the Greater Cincinnati Area and Ohio at large, language services providers like Affordable Language Services (ALS) have risen to the challenge, supporting the expanding language needs of schools, hospitals, clinics, and legal services, to name only a few.

ALS provides professional, certified translators and interpreters in each of the primary foreign languages spoken in the area, including Spanish, Arabic, Chinese, Somali, German, Amharic, Tigrinya, and many more. These requests are often made with very short notice and rapid turnaround times to ensure that non-English speaking and LEP residents in the metropolitan area and statewide have meaningful access to these critical services, from healthcare to legal support and education services.