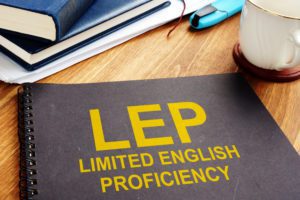 One of the fastest-growing segments of the translation industry over the past two decades has been for the Limited English Proficient (LEP) community. According to the U.S. government, LEP individuals are those “who do not speak English as their primary language and who have a limited ability to read, speak, write, or understand English.” Therefore, LEP translations include any types of documents needed to meet the needs of these individuals to provide access to information and services provided by federal, state, and local governments.

When most people think of LEP translation services, Spanish is usually the first language to come to mind, and for good reason. Based on U.S. Census Bureau data, there are roughly 40 million people in the United States who speak Spanish at home, representing a whopping 133.4 percent increase since 1990.

However, while Spanish continues to represent the most frequently translated language in the United States by far – and has even evolved its own unique linguistic characteristics and U.S. dialects — there have been other notable changes in the demographics of LEP translations. This changing language demographic has been most pronounced in fifteen states where the foreign-born immigrant population has increased by 15% or more between 2006 and 2010.

These fifteen states include North Dakota, West Virginia, South Dakota, Delaware, Nebraska, Minnesota, Wyoming, Pennsylvania, Alaska, Indiana, Florida, Nevada, Washington, Iowa, and Maryland. One in five foreign-born immigrants in the United States lives in one of these states. The countries of origin for the immigrants in these states were dominated by Mexico and Cuba, but also include significant numbers of immigrants from Haiti, the Philippines, China, Jamaica, Colombia, El Salvador, and Vietnam.

According to the data cited above, in the country as a whole, the top five languages (other than English) spoken are Spanish, Chinese, Tagalog, Vietnamese, and Arabic. However, in the fifteen states with the largest increase in foreign-born immigration, the top five languages are Spanish, Haitian-Creole, Chinese, German, and Tagalog. Among these fifteen states, there is an even greater degree of language diversity. For example, while Spanish was the top foreign language spoken in 14 of the 15 states (with “Other American Indian Languages” being the exception in Alaska), Maryland, Minnesota, and Delaware had significant (and growing) populations of immigrants speaking a variety of African languages.

One area of the changing language demographics in the United States that has received minimal attention is the rapid growth of immigrant populations and LEP individuals in rural America. In fact, some of the most linguistically diverse states cited above can be found in rural America.

Between 2000 and 2010, the rural population of racial and ethnic minorities increased by 19.8%, with the rural Hispanic population growing by 44.6% and accounting for more than 56% of all rural (non-metropolitan) population growth. This dramatic increase is forcing state and local government agencies in rural parts of the country to implement language access plans to account for the need to provide translations of vital documentation in foreign languages per federal law and regulations.