There’s no doubt, there are distinct cultural differences that come with being deaf or hearing impaired. American Sign Language is not just English signed, there’s different syntax associated with the language. On top of that, the Deaf have their own jokes, art, ancestry, and traditions (as shown in Tuesday’s post on Scottish Finger Signing). 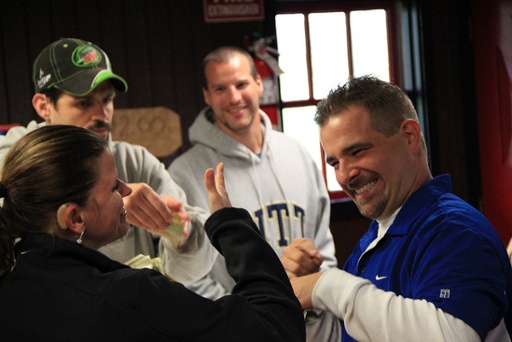 Now, a book titled People of the Eye: Deaf Ethnicity and Ancestry makes the claim that based on the extent to which members of the Deaf community identify themselves as Deaf above any racial, or geographical markers, it should be considered an ethnicity. 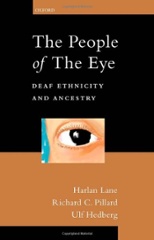 On sale from the Oxford Press here.

In the book, some Deaf people say being deaf gives them a different sense of community than a hearing person. Their language serves not only to communicate, but as a form of art through Deaf theatre, sign play, and folklore specific to Deaf culture. They dwell in the “Deaf World,” and though it is not a place you can visit, it is a mindset.

So you may say, sure, Deaf individuals definitely have their own culture. Trying to navigate it as a hearing person with no interpreter is as challenging as traveling to a foreign land. However, that doesn’t mean they compose an ethnicity. Where’s the biological tie?

People of the Eye looks at that too. Today, few people lose their hearing as the result of disease or trauma. Most deaf people are either Deaf or Hearing Impaired from birth. The ancestry of many Deaf people in America can be traced back to early settlers on Martha’s Vineyard who came from Weald, England. This is not to say that all people who are Deaf are related– just as you wouldn’t expect all hispanic people to be related– but it is a correlation that’s worth pointing out. Pillard says, “Ethnicity is family writ large.”

Even the authors admit there are some issues with officially recognizing the Deaf as an ethnic group. Many people lose their hearing as they reach old age, but that does not make them a member of Deaf culture. They probably identify more with the culture they’ve lived in their whole life, and instead of adopting Deaf culture, will see themselves as handicapped. Also, under current US law the Deaf qualify as disabled, a categorization that sometimes affords them extra pay for their work. Pillard recognizes that you can’t get the extra money, and claim you’re just another ethnic group.

Other scholars see the term “ethnicity” itself as a problem. In many cultures, the creation of ethnic groups has caused a divide within a population, feeding violence and unrest by focusing on differences rather than the humanity that people share.

The case is strong on both sides. The authors say they’re ready for the debate they hope their book will initiate.