Ever since British colonies started springing up in the Americas, we’ve been borrowing and building off their language. Now, there are marked differences between American English and British English, so much so that Facebook even differentiates between American, British, and Australian English when asking users what languages they speak.

This, understandably has led to some animosity between Americans and Brits, as both are very passionate about their version of English. Recently, we encountered a couple articles from the viewpoint of our friends across the pond.

One article, an Op-Ed on The Telegraph, claims Americans are angry with the British for “polluting their language.” It’s based largely off the work of Ben Yagoda, a professor at Delaware University who is tracking the influx of Briticisms like “bits” instead of “parts” and “on holiday” instead of “on vacation.”

Meanwhile, an article on Mail Online, cheers on Brits for refusing to pick up Americanisms. They also point to a study by the British Library showing that British English is actually evolving at a faster rate than American English. Jonnie Robinson, curator of sociolinguists for the museum, says that, “for whatever reason… American English remains very conservative and traditional in its speech patterns.” In many cases British speakers are moving away from the pronunciations that were standard just 50 years ago, while Americans maintain those pronunciations as outlined in the Oxford English Dictionary.

The British Library performed a study recording how speakers pronounced a series of words. If you’d like to take part in this study, click on this link. In case you’re wondering, here are some words that showed the most consistent differences. 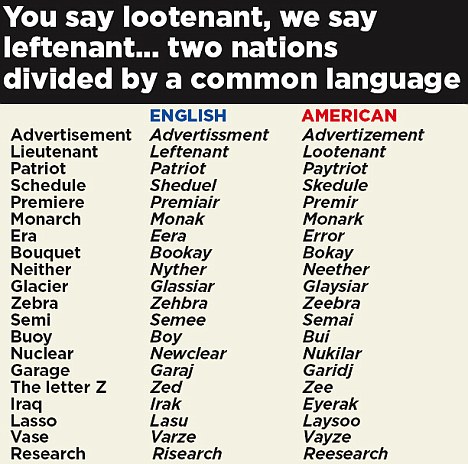