A number of the INTERNATIONAL and INTERETHNIC ORGANIZATIONS in the Cincinnati region gathered at the Netherland Hilton to listen to keynote speaker Nick Vehr, the founder of Vehr Communications, describe what is in store for the Greater Cincinnati area during the upcoming 2012 Choir Games. Nick gave an enthusiastic presentation with some slides from a previous Choir Games held in the country of China in 2010. He stressed that the photographs of the international participants cannot capture the excitement as well as the uniqueness of this event.

To learn more about the 2012 Choir Games and how you can volunteer your services for what will be one of Cincinnati’s finest moments as a city, we urge you to go to www.2012worldchoirgames.com. 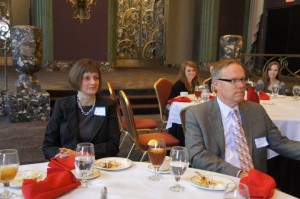 On a personal note, during the Q&A I raised the question, “how many other cities were in the running to host the games and how was it that Cincinnati was finally chosen”? He said that there were originally 20 cities in the running and then it came down to the last three. He also said that Erich Kunzel was very involved in bringing the games here before his death. A delegation came to Cincinnati to get a firsthand view of what we have to offer. While they were touring Music Hall they had the additional pleasure of talking with Erich in their mother tongue of German! In addition, the committee was very impressed with the choral history of Cincinnati as well as the practical layout of the city relative to the different venues that will be used in the downtown area. Many of the visitors will be able to walk to some of the venues where they will be performing. The rest is history! Cincinnati is the first city in the USA to sponsor the Choir Games!